​Letters home from a wealthy Edwardian gentleman during 1905.

Letters home from a wealthy Edwardian gentleman during 1905

Arthur gets his emergency funds, describes a frightening storm at sea, hasn't had any news from Australia in 2 1/2 months ...

My Dear Mother
We arrived at Pauillac at about 11 this morng. & came up here by train, hour & half. As soon as I walked into the hotel they asked me if I was Mr Dease & said there was a wire for me at shipping office, so I rung them up & they told me contents & later I strolled round to get it. I shall get the money Wed. morng. if it left by early post today & leave by the Rapide Wed. night & get to London Thursday 5.p.m. & will go to club.

You should have got my letter last Thursday or Friday morng. at latest as the “Atrato” was due Plymouth last Wed. evg. but I expect they struck the gale we did & were late, we took 2 days longer than they reckoned they would when we left Guadeloupe.

We had a pretty bad time, the Captain admitted it was the worst voyage he’d ever made to the West Indies, or rather between here & there, said he’d never known such continuous gales, right ahead, huge sea washed all over ship, not a dry spot on board, came down into my cabin & all floor was wet & alleyway outside; it lasted for 5 days so of course we made little progress; I got rather sick of it, but should not complain as some were pretty bad & did not appear for days.

We had a very rough trip from Saravilla [?] Columbia & frightened the charming Ecuador bride so much & made her so sick, that they left us there & returned to Ecuador; her husband was a nice little fellow & spoke French perfectly, [?] English & German having been educated in latter country.

We were very few passengers, a Columbian & his wife & 2 daughters, latter being only ladies & were hors de combat all the time, about 3 French fellows, a Columbian & a Spaniard, so we were a mixed crowd. It did my French a lot of good, still got rather bored in evgs. No bridge or anything tho’ toward end I took to playing dominos like a Frenchman our four consisting of self, Spaniard, a Columbian, & a Frenchman.

Feeding was good, but too much waiting & I don’t like hours for board ship, dejeuner 11 & dinner 6, makes evg. too long. We were all very glad to get to Santander yesterday morng. I & a very nice young Columbian who was on board went ashore. I went to Mass & then we strolled round & had a dejeuner a l’espagnole; I confess I got tired of the French cooking and am longing for a bit of roast beef or mutton, but after the hotel at Colon it was excellent.

The young Columbian & I are stopping here, he is about 26 or 27, never been out of his country before, he talks French a little so we get on all right & have been showing him round Bordeaux this aft. Noon, not that I know it my self. Bogata, his town, is where Rawlinson was to go about that railway, don’t know if he ever got there; it takes 10 days, train 2 hrs, boat 9 days & about a day mule, is not a convenient spot to inhabit.

Frenchmen not pleased about Port Arthur, heard the news yesterday morng. in Santander. I was so pleased when we arrived at Trinidad to find the “Atrato” there as Purser had promised to call for my letters at P.O. Kingston, so promptly went on board, but he told me there were none, so I was rather cold, at any rate had hoped for some Aust.[ralian] papers. It is 2 ½ months since I’ve heard from Australia, Oct 20th last from Aust. Rec.d at B.Aries & yrs. of about Oct 30th last from home.

I see in French paper big bush fire in N.S.Wales, know the country fairly well, 3 of the towns surrounded. I saw St. Pierre & Mount Pelée, rather interesting, we went to both Martinique & Guadeloupe. Very glad to be on land again & this is comfortable hotel, easy chair & fire all most welcome. Our boat was pretty old built in 1865, formerly as a paddle steamer & then converted into a screw.

Back on board ship heading for Australia via Aden & Columbo, dances with "his ladies", shows his strong religious side ...

My Dear Mother
We get to Colombo tomorrow morng. & have all day there. Getting pretty hot pretty hot now & will be there I expect. Been perfect weather all through, Red Sea was wonderfully cool considering what it generally is, very different to last time I went through 18 months ago. We lost a few passengers at Aden & lose a lot tomorrow, Ceylon people & others going on to the East. Had cabin to myself & port open all time. I see in cable we got at Aden that penny postage to Australia is to be established from 1st April & 2d from Aust. to England, about time they did this. Bob Black has bought a sheep run in N.Zealand  in South Island & is there now with his wife.

Been more excitement this week, tournaments, a dance Wed. night & concert last night, pretty hot dancing but managed a few with my ladies. Miss Miller plays & sings quite nicely, so we sing songs before dinner sometimes. The various youths on board are round her like flies round a honey pot as Mrs B. describes it, she is always so bright & cheery & by a goodeal [sic] the prettiest girl on board. Some nice youths but they all get off at Colombo for Ceylon & East. A man sang “Off to Philadelphia” last night, a song I had not heard for years.

Will you please send another £1-2-6 to ??. Nielley for me & have a Novena of Masses said for my intention, will send it to you from Melb. also the cost of weekly Times sub. & anything else I owe you.

Curious that there are five of us on board who were on the “Aorangi” last year crossing the Pacific. We are due in Melb. Easter Monday. Marjorie Mrs B’s 12 yr. old daughter is very happy & has a girl about her own age to play with.

Arthur goes on a 9 day motor tour, shows his car to people - they had never seen a car before ... 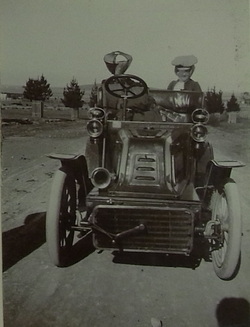 I found yr. letter of Apl.19th here on my return last evg. from a most delightful 9 days motor tour with Mrs Blake & sister.

We had fine weather all the time, it was glorious up north, warm light sun, we stayed with friends here & there & lunched with others en route & also stopped at one or two small places & night at Ballarat & also Bendigo & had a look round these two towns. It was a most happy 9 days with those two dear persons, really they are the nicest couple I’ve ever come across.

They had not seen much of the country in Vic.[toria] so enjoyed it a lot. We were 2 nights with the Jim Finlays & motored round my old place which I showed them & down to see the farmer who bought it, they were much surprised to see a motor turn up, none had ever been round these parts before. The wife, an old German, was too frightened to come near it, but talked to the ladies from a safe distance.

Saturday night we stopped with the Mollisons. We did 450 miles altogether, not so much for a motor, but we did not hurry too much. I expect to go up to the Mollisons on Sat. for 10 or 12 days.

So Maud will stop on for the present at Simonstown, but later will come nearer Dublin nodoubt [sic]. I see in papers this morng. There has been great excitement in House of Commons.* I see the Castlerosses are going to live at Killarney or rather Kenmare. They have been playing a piece called the “Road to Kenmare” an Irish American Co. they had the Earl of Kenmare  in it & his heir & one scene, the entrance hall at “Kenmare Castle” as they called it, was as near as possible like entrance hall at Killarney.