​The Story of my Discovery of Arthur's WW1 and Edwardian Letters Home.

​The Story of my Discovery of Arthur's WW1 and Edwardian Letters Home.

It pays to visit your local auction house...
I successfully outbid several other interested parties in the auction room, although to be honest, they didn't stand much of a chance, I had already decided that I was going to own these letters! At a cost of many hundreds of pounds (and a bacon roll and cup of coffee), I found myself the proud owner of a box of letters. To be honest, it was exceedingly difficult to view the contents of the box before bidding as most of the letters were tied with ribbon in neat bundles according to date and or subject. For example, "France 1915", "Rome 1914", "Australia 1920", the list goes on and on.

I bought a lot of about 500 letters, all relating to the same family and spanning the period from about 1830 through to 1920. But the 140 or so letters home from a son to his mother during the First World War undoubtedly opened my eyes to what, to me at least, has been a largely neglected part of the conflict, that of a large number of people behind the lines serving as unpaid volunteers.

Sadly in my desire to examine the contents of these bundles (even before I got home), I didn't take a photo, but the picture above gives an idea of the scale of the contents of the box. There were probably at least 500 letters in total, and it's my belief that this box had not been opened since the 1920's when Arthur's mother carefully compiled the contents, a real time capsule!

There are letters from all corners of the globe; Arthur travelled extensively from 1892 at least through to the 1930's as I can trace him on various passenger lists etc. There are also letters from about 1830 through to 1903 from many prominent Victorian people, including Lords and Ladies, and mentions of British and European royalty.

As I waded through the contents of the box and started to read some letters I realised what a fantastic find this was, he was a prolific letter writer and wrote home regularly from wherever he was. He would tell his mother and father of the sights, sounds and people he had met, he would describe the scenery and climate. Thankfully his mother also retained most of the letters in their original envelopes, which in themselves also give a wealth of information from the various postmarks and steamship names.​

Arthur's letters were soon to become a big part of my life... 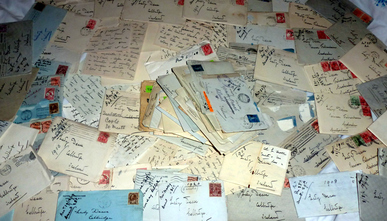 Letters not yet transcribed...
My days were soon taken up with the all-consuming task of transcribing the letters, but I have still barely scratched the surface. Those that grab my attention most are Arthur's letters home from World War One. I can honestly say that I didn't realise that people like Arthur existed or took part in World War One. I feel strongly that our learning about the Great War is entirely dominated by the undoubted bravery and sacrifice of the fantastic British Tommy, but has this has also excluded people like Arthur whose contribution to the war effort has become lost in the sands of time?

The British forces on the Western Front were concentrated in Flanders, Belgium and Northern France; however we should remember that the Western Front extended for over 400 miles down through France to the border with Switzerland. Of course, we should not forget the massive losses suffered by the French and other nations during this conflict. Arthur was primarily based in North Eastern France, in the mountainous area of The Vosges and later north-west of that area. I am still researching the exact whereabouts of his section; their location is not always apparent from his letters due to censorship and security of course.

Reuniting a lost photo album in Australia with Arthur's letters in England ...

I have also discovered an album of photographs taken by Arthur languishing in an archive, and hope to be able to publish some of these quite soon. The photo album covers the period from approximately 1900 to 1906 when Arthur travelled around the world. I also happen to own 100 or so letters he wrote home during this time, and I have begun the task of adding some of these Edwardian letters to this site.

A family history in a box...

There is also something terribly sad about these letters ending up as an auction lot. I have a family history in a box it would seem to be the only remnant of a once proud and influential family. How the letters came to be there, I will probably never know. When I hold these letters, I sometimes try to imagine Arthur writing them, often under incredibly difficult circumstances I am sure, and the thrill of actually handling them never diminishes. I continually remind myself of the sacrifice he and millions of others from many nations of the world made.

I sincerely hope that these WW1 letters home will stimulate interest in these brave people and also shine a light on this largely overlooked aspect of the First World War.